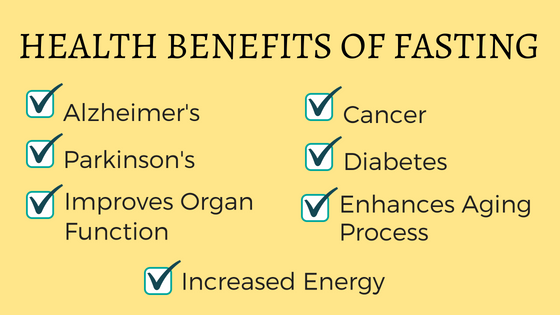 From the perspective that when the Lord instructs us to do something spiritual there are numerous ancillary benefits, it should not be surprising that fasting appears to carry surprising health benefits.

One would be hard pressed to find a health professional who would not admit that many of America’s illnesses are due to over-eating, including the devastation of heart disease. Did you know that America’s founding fathers believed that when illness was present the two most important steps to recover were rest and fasting? Could they have possibly understood something medically 200 years ago that we would be completely ignorant of as a society today? And what of numerous Asian cultures that practice fasting not for spiritual reasons but solely for health benefits including a marked improvement in clarity of thought? Are those cultures simply ignorant to modern science? While it may never be accepted as “best practice” by modern medicine medical research is again conducting studies to consider the potential correlations between fasting and numerous improvements of ailments such as Alzheimer’s, Cancer and Parkinson’s.

What follows is a miniscule set of the research done regarding the health benefits of fasting. Since Japanese cell biologist Yoshinori Ohsumi won the Nobel Prize in Medicine in 2016 for his research around fasting, the body of work on the topic has exploded. Today it is estimated that as many as 5,000 research papers are written annually on the topic of the health benefits of fasting.  Ohsumi's work focused on how fasting helps slow down the aging process and has a positive impact on cell renewal.

When fasting on bread and water it is important to use whole grain breads as were prevalent in biblical times that will be high in protein and rich in vitamins. The Wall Street Journal highlighted the benefits of whole grain bread that we use when fasting:

“[whole grain bread has] all these enzymes that are alive and volatile, which are extracted from white flour to make [white bread] shelf stable [and which destroys all nutrition in white bread].  Those [whole grains] are the things your body is searching for to make digestion happen, to make nutrition happen.”

“When you compare what’s removed from wheat to make commercial flour, it tracks pretty well with the nutrients that are most deficient in the U.S. population.”

For newcomers the question inevitably arises, can't I fast on vegetables and water ... or something besides bread? The implication is that bread and water fasts are not as good for one physically as other fasts and the pilgrim is of the attitude if I am going to fast I should "make the most of it physically". Our response is that 1st century Christians fasted on bread and water, obviously being much closer to the actual teachings on fasting than we are 2,000 years later so their example is due consideration. Further, in Medjugorje on July 21st, 1982 the specific teaching was given:

"The best fast is on bread and water. Through fasting and prayer, one can stop wars, one can suspend the laws of nature. Charity cannot replace fasting...everyone, except the sick, must fast."

It is interesting that the perspective of that teaching aligns completely with the teachings of the Greek Orthodox church that also specifies fasting each Wednesday and Friday is required by all except the sick. The Greek guidelines even require a doctor to excuse believers from fasting. So we push on with the bread and water fast given this guidance, trusting that the reasoning for bread and water fasting is not fully appreciated by either science or believers, and fully expecting science to change its tune in the years ahead as to how beneficial this specific regimen is for believers.

As an update, 37 years after the statement was made of bread and water being the best fast, in May of 2019, research was published that whole grain breads have a surprisingly important role in maintaining health, contrary to the world's perspective that "carbs are bad for you."  Tufts University looked at over 80,000 cancer patients and remarkably concluded "Low whole-grain consumption was associated with the largest cancer burden". Who would have thought bread could be that important to one’s health?

Other research is now showing that fasting may aid in restoring health with regards to Alzheimer’s, dementia, diabetes, restart organs that are failing, and slow the aging process.

Click Below To Receive Weekly Fasting Reminders & Join Us As We Fast For America's Renewal!

Here are links to more content on fasting:
The Power Of Fasting
Fasting ... Trigger To The End of WWII?

St. Joseph Partners is a for-profit business that has funded Fast for America for over ten years. To the extent you support our work to renew America and if you understand why gold and silver protect believers' wealth in this world, please consider us when you or recommend us when someone you know buys or sells gold and silver. From our website www.StJosephPartners.com you can buy and sell over 150 forms of precious metals with prices updated each minute around the clock. We close on Sundays to honor the Sabbath. Click here for a link where you can view a brief video about our firm and a brief video about why all investors should have some gold and silver in their portfolios.

Please read and agree to the terms for purchasing from us.